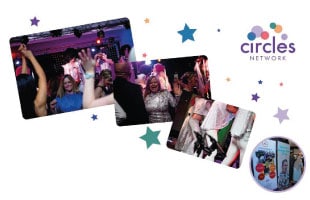 The weather outside may have been dull and wet, but on the evening of 13th April the atmosphere inside Holiday Inn West Peterborough, far from reflected that - warmth and friendship were the order of the night for 'Spencer's Ball' .

Spencer’s charity was originally set up by Liza Raby after being inspired by her son Spencer; Spencer has a rare genetic condition and severe learning difficulties.
Since the charity was set up it has grown and Liza was joined by Rachel Carolan whose son, Triston has Dravet’s syndrome and severe learning difficulties.
Triston has been supported by Circles Network for the last 10 years. Spencer's charity has grown over the last 11 years and now has a small committee of helpers.

The most recent Ball was held on 13th April and raised a fantastic £4,500 with everyone enjoying dancing to the fantastic Uncle Funk; having a flutter at the casino
or bidding on some fantastic lots in the auction. Everyone had a great night and we all look forward to next year’s event. Special thanks go to the sponsors of the
night; The former mayor of Peterborough, George Bradley. Uncle Funk - http://www.unclefunk.co.uk/ and Dan Waters- photographer. (see below for the
fabulous pictures from the evening!)

More exciting events are on the horizon for Circles Network, Peterborough -  to name just a few we will be hosting cake bake sales and sponsored male intimate waxing.... and next month we will be doing 7 back to back keep fit classes! We will also be hosting a pamper party night and of course our annual Ball, for updates or to follow the Circles Network news visit our BLOG or follow us.